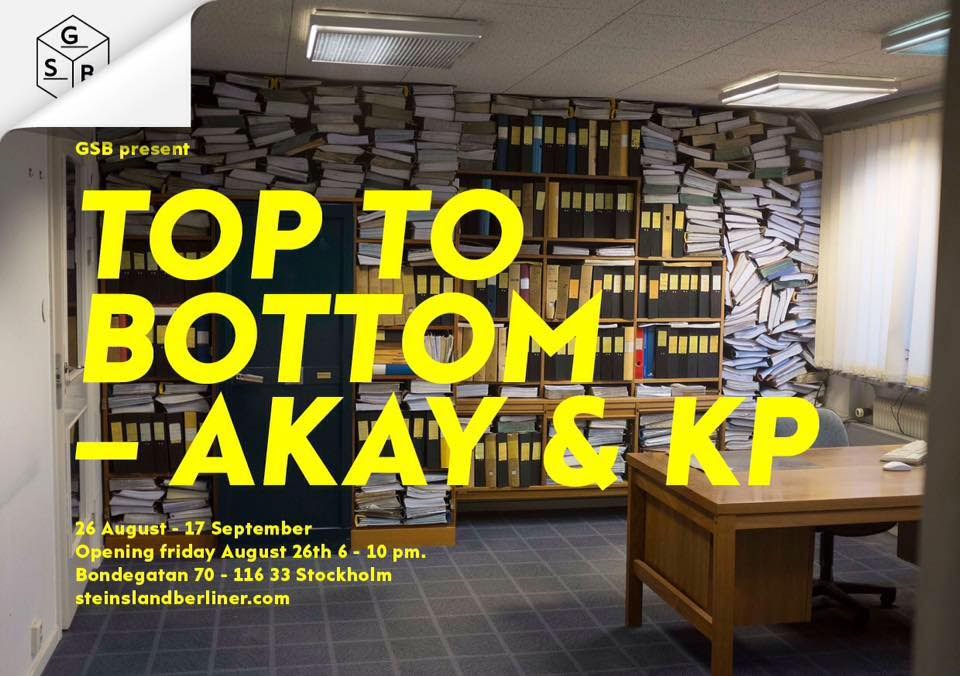 In preparation for Akay & KP’s first exhibition at the gallery we want to give you an introduction to their work.

Who is Akay & KP?
Both have an urban-culture background and they have been working together on and off for decades. They have often made projects in the public sphere under various pseudonyms, without permission, for everyone to use – if you can find them. They have been called urban explorers, mainly because of their ability to find hidden places in the city landscape and re-make them into something new. If you been around Stockholm and kept your eyes open it is very likely that you have seen works by Akay or KP before, probably the “Akayism” posters or the deer stickers – or even some of the birdhouses on top of traffic signs.

How does the work process look?
KP and Akays projects often involve an element of trespassing, using unused spaces, which entitles one or two fences to be climbed, and unauthorized constructions to be built. The projects tend to be longterm, taking days to weeks to months to complete. They used to work at night in the dark, but by being active for many years they have realized that working during the day is easier. At night you are one of five doing something, and during the day you are one out of ten thousand, blending in. Being anonymous gives them the possibility to work in peace. People have often tried to contextualize their works with different political messages; for example that Traffic Island is a critic against living situations in the cities. The artists themselves take no responsibility for these applied contexts. Their main drive is to use the city as their living room, and do projects that they think is fun. But we are all free to think around their artworks, creating new meaning.

What can we expect from Top to Bottom?
They are giving us an installation that will fill the gallery space. The material they are using has been transported to the gallery from an abandoned building. Much like building an invisible bridge between two places, transforming what has been previously unnoticed; a once public room, with its content moved and displayed in a new way. Using found material is nothing new in the art world, and even if you can question how this material was apprehended they are not looking at it as destruction rather recycling and building something different.

Where could you have seen works by them before?
They have done many different projects at various locations around the city. The one project that got a lot of attention was Traffic Island, built in 2003 and stood to the end of 2006. The work, a small red cabin built in traditional style, was places over a traffic tunnel orifice, with a garden and was surrounded by a fence. The building was open for anyone, you could even stay over and sleep there. The building is an element that keeps coming back into their practice. Another project 12 m³, a building hanging of a cliff wall, leaving no footprint on the ground, taking up as little space as possible. It took the artists about four weeks to build, since they only work with found material, this was the most time consuming part of the project. 12 m³ raised a lots of questions about ownership. Since the house did not take up any physical land who owns it, the city planning office in Stockholm only regulates what is on the ground. The artists found themselves a loophole in the system; they owned the house but not the land. Eventually they removed the building and put it on a raft in a lake.

We are used to seeing their artworks outdoor, why indoors this time?
The installation itself is to be looked upon as an experience, it will change over the time that the exhibition is open. This particular work needs the protection that a room can provide and the artist invites the viewer, or any one who passes by, to be part of it and make their own interpretation of what it means. By building the installation in a gallery room, the artist wants to keep the mystery of the building where the material originated from.